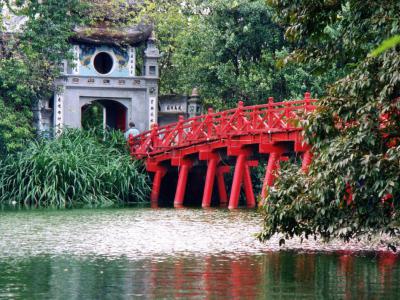 The Ncog Son temple stands on an island of the Hoan Kiem Lake. There was a temple at the location from the 14th century. The present structure was built in the 18th century. A three passage gate called the Tam Quan stands at one end of a red wooden bridge called The Huc (Rising Sun bridge). The Huc connects the Island with the mainland.

The Ncog Son temple is dedicated to many heroes. The main altar is dedicated to the hero Tran Hung Dao, who defeated and army of 300,000 invaders from the Chinese Yuan dynasty. Other altars are dedicated to La To, the patron saint of physicians, the scholar Van Xuong and Nguyen Van Sieu, a Confucian scholar who voluntarily restored the temple and its surroundings in 1864.

Nguyen Van Sieu added the Thap But, a 30 foot stone obelisk with a tip that resembles a paintbrush found to the left of the gates and Dai Nghien, a hollowed rock in the shape of a peach called the writing pad to the temple complex.

The temple has a pavilion in front of the altars and many souvenir shops for tourists. Elderly Vietnamese gather at the courtyard of the temple to play danh co tuong or Chinese Chess.
Image by goosmurf on Flickr under Creative Commons License.