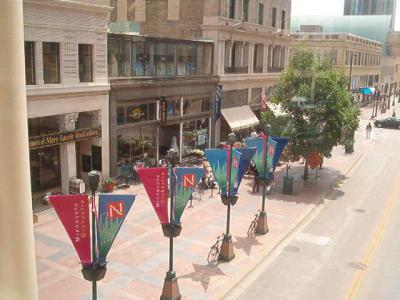 Nicollet Mall is a twelve-block portion of Nicollet Avenue running through downtown Minneapolis. It is the shopping and dining district of the city, and also a pedestrian and transit mall. Along with Hennepin Avenue to the west, Nicollet Mall forms a cultural and commercial center of Minneapolis.

Several notable Minneapolis buildings line the Mall, notably the IDS Center, the former Dayton's flagship store, Orchestra Hall, and the Hennepin County Library. On Thursdays during the summer, the Nicollet Mall hosts a farmers' market while in the winter the Holidazzle Parade, now entitled "Holidazzle Village", are hosted in the Mall. The parades were held from the day after Thanksgiving until a couple days before Christmas. The event started in the early 1990s to increase business for downtown stores.
Image Courtesy of Wikimedia and Hephaestos.
Sight description based on Wikipedia.