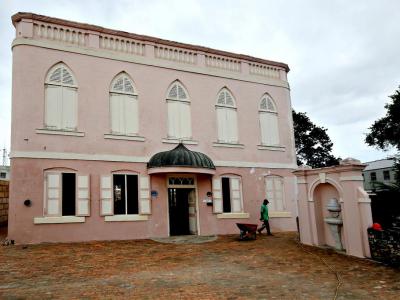 Built in 1654, it was destroyed by a hurricane in 1831, was rebuilt, fell into disrepair until it was sold in 1929. Haim Isaac Carigal was in Barbados, perhaps acting as rabbi of the congregation, at the time of his death in 1777. About 300 Jewish people of Recife, Brazil, persecuted by the Portuguese, settled in Barbados in the 1660s. Skilled in the sugar industry, they quickly introduced the sugarcane crop and passed on their skills in cultivation and production to the Barbados land owners. With their help, Barbados went on to become one of the world's major sugar producers and one of the richest European territories in the West Indies. The Nidhe Israel Museum was opened in 2008.
Image by NYC2TLV on Wikimedia under Creative Commons License.
Sight description based on wikipedia

This sight is featured in a self-guided walking tour of Bridgetown, Barbados within the mobile app "GPSmyCity: Walks in 1K+ Cities" which can be downloaded from iTunes App Store or Google Play. Please download the app to your mobile phone or tablet for travel directions for visiting this sight. The app turns your mobile device to a personal tour guide and it works offline, so no data plan is needed when traveling abroad.