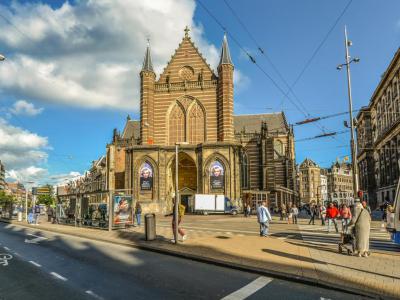 The Nieuwe Kerk or “New Church” is a 14th century temple located on Dam square in Amsterdam, next to the Royal Palace. This church was built to accommodate the growing number of parishioners after the Oude Kerk (Old Church) was no longer able to cope with the task. Repeatedly damaged by fire in 1645, it was rebuilt and assumed Gothic style.

With time, the building acquired some early Renaissance features, while remaining tower-less. The beautifully decorated stained glass windows depict historic events associated with the church, such as the coronation of Queen Wilhelmina. The interior's highlights include admirable altar, great pipe organ, sepulchral monuments with the tomb of Admiral Michiel de Ruyter, a Dutch naval hero, and more. In 1578 the church became Protestant, upon which many of its treasures were removed and frescoes painted over.

After being declared the National Church in 1815, it has been the site of royal weddings and inaugurations. Dutch Prince Willem Alexander and Princess Maxima married here in 2002.

Although still used for recitals, the Nieuwe Kerk is no longer used for services and instead represents a popular exhibition space. The themes of exhibitions held here are varied and include some rather peculiar ones, like the Buddhist art of ancient Bactria. Postcards, books and gifts are sold at a museum store within the church. A popular cafe adjoining the building, called the Nieuwe Café, has a large outer terrace.

Why You Should Visit:
Worth seeing if you like old buildings and history in general, but don’t expect a religious experience.

Tip:
Feel free to step inside the lobby to marvel at the beautiful giant stained glass panes.
Exhibitions can be a little overpriced but good value with the I Amsterdam card.