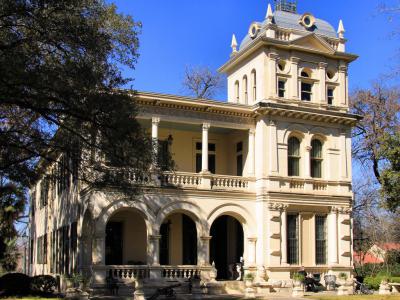 The Norton–Polk–Mathis House, also known Villa Finale, is a historic building occupying one of the oldest sites in the King William Historical District. In 1869 Russell C. Norton, San Antonio merchant and Mayflower descendant, acquired three lots of land fronting on King William Street and running down to the San Antonio River. He began construction on the property in 1876.

The significance of this house is that, in the course of the 19th century, it was remodeled several times progressively adding a second story and typical Victorian gingerbread rear gallery, thus allowing to trace the evolution of Texas architecture, from the simple stone frontier building to the monumental Italian Renaissance Revival tower and porch.

After a sequence of owners, the house was eventually turned into a boarding residence and remained so until 1967, when it was purchased by local civic leader, Walter Nold Mathis, who then spent two years undertaking its extensive restoration and returned the house to its original condition. Mathis named the home Villa Finale as he intended it to be his last dwelling. He also purchased 16 more properties in the King William neighborhood, restoring some of them fully and stabilizing others prior to selling them to those who agreed to finish the work. For his efforts in resurrecting the neighborhood, Mathis came to be known as the "father of the modern King William".

In 1971, the house was designated a Recorded Texas Historic Landmark and, as a contributing property to the King William Historic District, has been listed on the National Register of Historic Places. Upon Mathis's death in 2005, he willed the house to the National Trust for Historic Preservation which now operates it as a museum – open for tours on a limited basis.
Image Courtesy of Wikimedia and Larry D. Moore CC BY-SA 3.0..
Sight description based on Wikipedia.