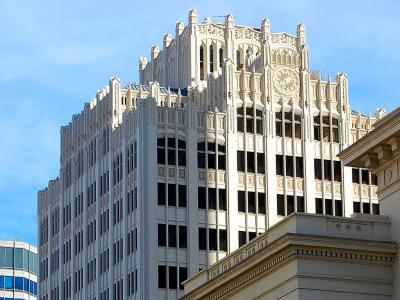 One of the most dazzling projects in Austin’s history, the Norwood Tower is a 16-story steel-frame building clad with precast concrete panels. The tower remained the highest commercial building in the city and the third tallest structure, after the Texas State Capitol and the Stephen F. Austin Hotel, until 1971. Its design exemplifies the Gothic Revival (or "Commercial Gothic") architectural style common among 1920s-era Texas high-rise buildings, with its vertical lines, rich Gothic tracery – pinnacled roof line and sophisticated elongated roof details, flamboyant arches and gargoyles; the lobby's ceiling is ornamented with golden leaves. The tower remains the only high-riser in Austin built in this style.

In the early 1920s, local financier Ollie Osborn Norwood decided to build a large new office tower to provide professional space for the growing city. He planned a cutting-edge professional complex, with central air conditioning in every office (an Austin first) and an integrated parking garage.

When the garage was completed in January 1928, Norwood demolished a pre-existing residence on the lot and began building an office tower on the site. The latter was completed in the summer of 1929, after which the Norwood Building was occupied by medical, legal and financial offices, as well as retailers and government agencies. Beginning in January 1934, Capital National Bank of Austin occupied the ground floor of the Norwood Building. In 1944 the bank purchased the building and renamed it the "Capital National Bank Building."

During the Segregation Era before the Civil Rights Act of 1964, the office of the Norwood Tower's maintenance engineer, African-American Clarence Odie Williams, was the only public restroom in downtown Austin open to "colored" guests, and it was regularly visited by African Americans who had business downtown.

In 1981, CNB moved out to a larger building, upon which the new owners changed the name of the edifice to the "Norwood Tower" and undertook its major renovation between 1982 and 1983. The tower was declared a Recorded Texas Historic Landmark in 2006, and on February 7, 2011 it was added to the National Register of Historic Places. The Norwood Tower is currently owned by the family of former President Lyndon Johnson.
Image by LoneStarMike on Wikimedia under Creative Commons License.
Sight description based on wikipedia