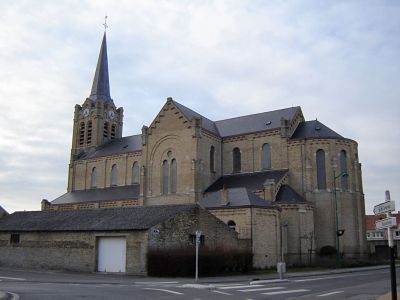 Many of the kings and queens of France and England prayed here; and John Bourchier, 2nd Baron Berners is buried in the church choir. It was classified as a historical monument on September 13, 1913. Charles de Gaulle and Yvonne Vendroux were married in the church in 1921. The church is large and has a fortress-like appearance. Its layout is in the shape of a Latin cross. There is a large nave with aisles, north and south transepts, a choir with choir-aisles, and a side chapel. A notable feature is the high altar, mostly completed by 1626, which has carvings and bas-relief. A pedestal and a statue are dated 1628, while two other statues were added in 1629, and the balustrades finished in 1648. Among the works of art is a painting by Peter Paul Rubens of the Descent from the Cross.
Image Courtesy of Wikimedia and LimoWreck.
Sight description based on Wikipedia.