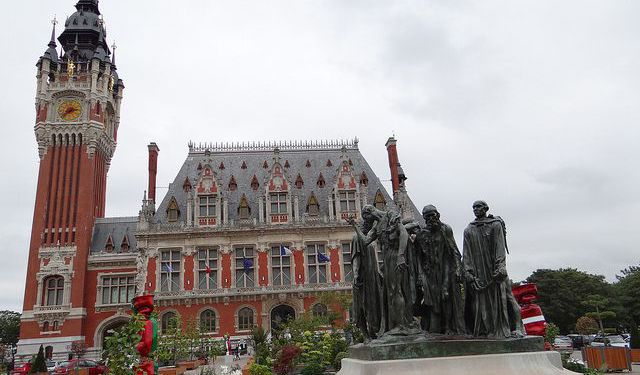 Calais has no shortage of quality museums, beautiful buildings and cultural monuments fit to impress visitors willing to acquaint themselves with the city's rich history and architecture. Other than these, the old city has quite a bit to offer its guests in terms of good time, particularly in summer. Take this orientation walk to find your way to some of the most notable landmarks of Calais.
Image Courtesy of Flickr and Gary Bembridge.
How it works: Download the app "GPSmyCity: Walks in 1K+ Cities" from iTunes App Store or Google Play to your mobile phone or tablet. The app turns your mobile device into a personal tour guide and its built-in GPS navigation functions guide you from one tour stop to next. The app works offline, so no data plan is needed when traveling abroad.

Founded in 1885 in the neo Flemish style of the 15th century, the town hall is one of Calais' finest landmarks. Built of brick and stone, the building commemorates the union of the cities of Calais and Saint Pierre in 1885 on a piece of dry land between the two towns. The belfry, 75 meters high, contains one of the most gorgeous chimes in the north of France which can be seen for miles around. On the first floor you can admire the large lounge, the room where weddings take place and the room of the town council; on the second floor are the magical stained glass windows depicting the re-conquest of the city.
Image Courtesy of Wikimedia and Patrick.charpiat.
2

Located in the north district of the town, in an old lace factory right on the docks of Calais, the museum emphasizes the world-famous Calais lace. Opened in the spring of 2009, the edifice's most surprising element is undoubtedly its new contemporary façade, a bulging crystallized featuring lace-like patterns that glow when lit from behind, covering the front of the present building and the temporary exhibitions hall behind. Designed by the two architects, Alain Moatti and Henry Rivière, it hosts interesting exhibitions of unique hand-made designs, lingerie and lace displayed in different creations by Jean-Paul Gautier and Chantal Thomas.
Image Courtesy of Wikimedia and Serge Ottaviani.
3

The theatre was built in 1903 and opened in 1905 on a former cemetery used between 1811 and 1871. The first floor of the facade is decorated with statues symbolizing the four arts: poetry, comedy, dance and music. On the second floor, four busts invoke the memory of composer P. Monsigny and the poets A.Lesage, W.Lebrun and Pierre de Belloy, author of "The Siege of Calais", who played in 1765. Located on the square Albert 1st, the edifice can be found right next to the monument built in honour of Joseph Jacquard in 1910, whose invention improved the development of the Calais Lace that made the town wealthy and famous.
Image Courtesy of Wikimedia and Bodoklecksel.
4

The building was built in October 1870 and is absolutely beautiful, especially at night because the shape of the edifice is stunning. The exterior of the church is extraordinary, presenting a beautiful tower, and inside it you can see a beautiful altar and precious icons, which are great relics for Calais. There is a little town area next to Sacre Coeur, which has some lovely little traditional shops.
Image Courtesy of Flickr and |JL62| Absent.
5

Situated next to the Town Hall of Calais, the museum has served as command post to the German Army during the war and after this, the bunker was transformed in 1962 into a museum to display objects, exhibitions and other collections such as flags, arms, uniforms, weapons, newspapers, planes and information relating to the 1939-1945 war. For those interested in the historical heritage of the towns they visit, the War Musuem of Calais is a great source of information.
Image Courtesy of Wikimedia and F. Lamiot.
6

6) The Burghers of Calais (must see)

Les Bourgeois de Calais is one of the most famous sculptures by Auguste Rodin, completed in 1889. It serves as a monument to an occurrence in 1347 during the Hundred Years' War, when Calais, an important French port on the English Channel, was under siege by the English for over a year.

The story goes that England's Edward III, after a victory in the Battle of Crécy, laid siege to Calais, while Philip VI of France ordered the city to hold out at all costs. Philip failed to lift the siege, and starvation eventually forced the city to parley for surrender. Edward offered to spare the people of the city if any six of its top leaders would surrender themselves to him, presumably to be executed. Edward demanded that they walk out almost naked, wearing nooses around their necks, and carrying the keys to the city and castle. One of the wealthiest of the town leaders, Eustache de Saint Pierre, volunteered first, and five other burghers soon followed suit, stripping down to their breeches. Saint Pierre led this envoy of emaciated volunteers to the city gates. It was this moment, and this poignant mix of defeat, heroic self-sacrifice, and willingness to face imminent death that Rodin captured in his sculpture, scaled somewhat larger than life. In history, though the burghers expected to be executed, their lives were spared by the intervention of England's Queen, Philippa of Hainault, who persuaded her husband to exercise mercy by claiming that their deaths would be a bad omen for her unborn child.

Image Courtesy of Flickr and London looks.
Sight description based on Wikipedia.
7

Opened in 1966, the fine art museum is notable for its amazing works of art from Rodin's famous bronze statue of Six Burghers and Flemish artists in the 15th century to a modern art collection of the present day, which includes works by Picasso. Also on display are the collections of 400,000 samples of lace - both machine and handmade, and elements relating to the history and geology of the area. Designed by architect Paul Pamart, the building has been divided into two departments, the lace division containing old antique handicrafts and fine arts presenting accessories, costumes and lingerie.
Image Courtesy of Wikimedia and Hippolyte-Joseph Cuvelier.
8

Many of the kings and queens of France and England prayed here; and John Bourchier, 2nd Baron Berners is buried in the church choir. It was classified as a historical monument on September 13, 1913. Charles de Gaulle and Yvonne Vendroux were married in the church in 1921. The church is large and has a fortress-like appearance. Its layout is in the shape of a Latin cross. There is a large nave with aisles, north and south transepts, a choir with choir-aisles, and a side chapel. A notable feature is the high altar, mostly completed by 1626, which has carvings and bas-relief. A pedestal and a statue are dated 1628, while two other statues were added in 1629, and the balustrades finished in 1648. Among the works of art is a painting by Peter Paul Rubens of the Descent from the Cross.

Image Courtesy of Wikimedia and LimoWreck.
Sight description based on Wikipedia.
9

Located in the port of Calais, the 51 meter high lighthouse came to life in 1845 and functioned for the first time in 1848 with oil, and then from 1883 with electricity. The light of the lantern gives out four blinks followed by a gap of seven seconds. A spiral staircase of 271 steps leads to the top of the tower, which will give you a gorgeous view over Calais, the Channel and on a clear day, the White Cliffs of Dover 26 miles away.
Image Courtesy of Wikimedia and Ottaviani Serge.
10

Fort Risban was conquered by the English in November 1346 and later renovated the fort and made important changes, such as the creation of the Tower of Lancaster built in 1405, but it belonged to Calais again in January 1558 thanks to the Duc de Guise. The works of the fort began in the 13th Century but the French fort suffered more changes than those on the other side of the channel. The fortress is surrounded by dunes and the sea and the inside is divided in two by a door accommodating pillboxes. Today, it has a peaceful role as a nautical base and a beautiful attraction for everyone.
Image Courtesy of Wikimedia and Romainberth.
11

Located in the northwest corner of the city, the Citadelle was a former Medieval castle and on its ruins was constructed a vast citadel better oriented to the new techniques of war. Built between 1560 and 1571, the castle forms a square enclosure with six towers. On the occasion of their visit, Louis XIII and cardinal Richelieu considered making Calais an immense walled city that could become a vast military harbour. But this project amounted to nothing and only an arsenal and two new bastions were built.
Image Courtesy of Wikimedia and Davy-62.
12

Officially dating from 1302, this monument, 35 meters high, is probably one of the oldest monuments in town. In the thirteenth century it was the center of a medieval castle and its date of construction is still uncertain. It is said that it probably could have been a monument that Charlemagne erected in order to defend the coastline against Norman troops. In 1580 the tower suffered a convulsion that split the tower in two and in 1931 it was classified as an historic monument.
Image Courtesy of Flickr and Mike Forbester.