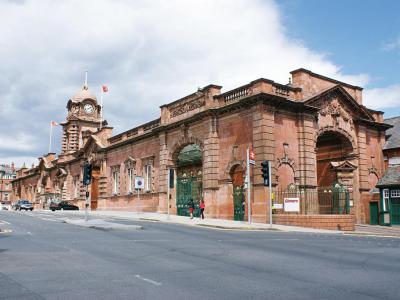 Nottingham Railway Station, for some time known as Nottingham Midland, is the principal railway station of the city of Nottingham and the Greater Nottingham area. The station was built in an Edwardian Baroque Revival style at a cost of £1 million (£79,620,000 as of 2012). The station was built using a mix of red brick, terracotta (which was used as a substitute for building stone) and faience (a glazed terracotta) with slate and glazed pitch roofs over the principal buildings. The carriage entrances have Art Nouveau wrought-iron gates. The station’s forebuildings were opened to passengers without any formal ceremony on 17 January 1904, although next day the Evening News reported that the platforms were still in a state of chaos and these were not expected to be ready for another nine months.

The Midland Railway always suffered the indignity that its rival the Great Central Railway crossed the top of Nottingham Midland station on a 170-foot-long (52 m) bowstring girder bridge. This became redundant in 1967 and was finally dismantled in the early 1980s. Plans exist to build a new tramway bridge over the station on the same alignment.