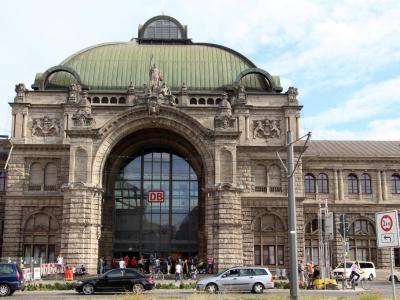 Nuremberg Central Station (German: Nürnberg Hauptbahnhof) is the largest station in north Bavaria and belongs to the 20 stations in the highest category of importance allocated by DB Station&Service. The Hauptbahnhof is located on the southeastern perimeter of Nuremberg's Altstadt, immediately opposite the Königstor (King's Gate) where the streets of Marientorgraben, Frauentorgraben, and Bahnhofstraße meet. The DB Museum, the corporate museum of Deutsche Bahn AG (formerly the Verkehrsmuseum), is close to the station, as is the Staatstheater Nürnberg opera house.

Having been originally built as in the neo-Gothic style, the station was rebuilt in 1900 largely in the Neo-Baroque style. The most striking feature is the muschelkalk which characterizes the exterior façade. The portals to the individual halls are richly decorated and primarily depict symbols of technological progress; for example, a winged wheel above the portal in the Mittelhalle. The lounge, in which the present-day travel center is located, was built in 1904/1905 by Bruno Paul in the Jugendstil. Sections of the walls are decorated with fine mosaics, the roof is ornamented with unobtrusive stucco.

The Jugendstil lounge is one of the few areas of the station, which has survived the destruction of the Second World War. Above the main portal is an advertising column from the early 20th century.

In 1950 plans were made to change the Neo-Baroque style to a Neo-Gothic style. Shortly before work began, however, it was stopped so that only a few areas were changed.

Why You Should Visit:
While the building itself is very nice it is worth noting that the reason Nuremberg was chosen for the Nazi rallying grounds was its ability to link Germany by rail, so this central station is historical as well.
Image by Christian Scherm on Wikimedia under Creative Commons License.
Sight description based on wikipedia