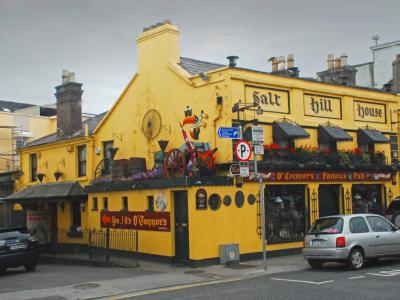 O'Connor's Pub is a lively pub in Salthill. Though the pub was established in 1845, the current pub was opened in 1942 by Thomas O'Connor. The O'Connors have remained in ownership of the pub for three generations.

The pub bills itself as a "real Irish pub" stating that they neither serve food nor have a television on the premises. O'Connor's Pub does offer a wide variety of drinks including bottled beer, gin, vodka, whiskey, shots, wine and cocktails. The pub boasts a large number of beers on tap such as Guinness, Bluemoon, Heineken, Galway Hooker IPA, Orchard Thieves Cider and many more.

O'Connor's Pub is known for lively music with plenty of singalongs. It is also known as being the spot where Ed Sheeran recorded "Galway Girl" in 2018. Other famous guests to the pub include musician Sharon Shannon, actor Chris O'Donnell, playwright Martin McDonagh and footballer Martin Keown.
Image Courtesy of Flickr and Andrew Hurley.