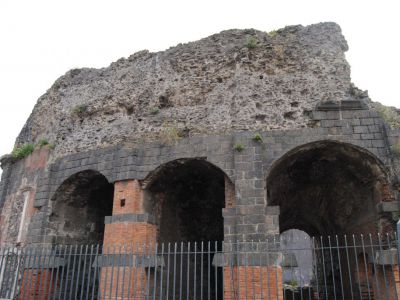 The Odeon of Catania is one of the most significant monuments of ancient Catania. The Odeon exemplifies ancient Roman architecture in Catania. It was built as a semicircular construction that could accommodate 1500 spectators. This Odeon is similar to those funded in other Greek and Roman cities. The building material was mainly lava rock, but also bricks and marble. The orchestra - semicircular space between the auditorium and the stage, was and still is paved with marble. Some of the rooms in Odeon were restored in the sixties, but their function remains unclear until today.
Image by Archeo on Wikimedia under Creative Commons License.