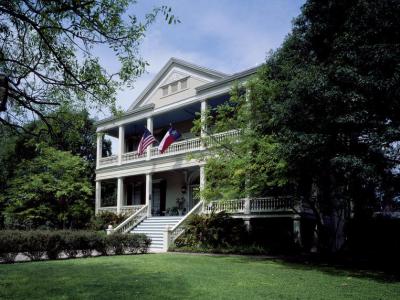 One of the only houses within the King William District not built by German immigrants, the Newton Mitchell or Oge House is also the most important of the three fine residences found on the one-block-long Washington Street. This imposing two-story late Greek Revival edifice was built by the U.S. Army as the commanding officer's quarters for the San Antonio Arsenal in 1860, and is one of the early stone residences in the city. Its first floor and basement date back as far as 1857 when the place was owned by Attorney Newton. A. Mitchell and his wife Catherine (Elder).

The exquisite Neo-Classical antebellum mansion sits on 1.5 acres of land overlooking the famed San Antonio River Walk, surrounded by lush plantings, rose gardens and lawns. Louis Oge (1832-1915) bought this property in 1881, after migrating to Texas in 1845 with the Castor Colony, serving in Texas Rangers under W.A.A. ("Bigfoot") Wallace, and making a fortune as a rancher. He was a San Antonio business leader and served as alderman and school board president. Oge hired a leading local architect Alfred Giles to enlarge and remodel the building.