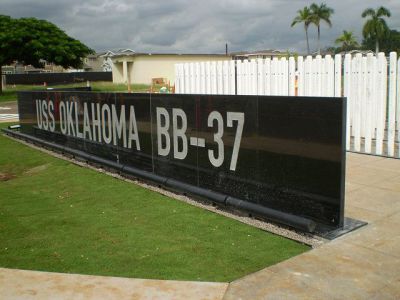 The USS Oklahoma was a World War I-era battleship, and one of the first to rely on oil for power, as opposed to older, coal-powered battleships. Though the Oklahoma was used in World War I, she was modernized between 1927 and 1929, and used to rescue refugees during the Spanish Civil War. After the ship returned to the Pacific in 1939, she remained there. The ship was sunk during the attack on Pearl Harbor in 1941, and 429 members of her crew sank with her.

Unlike the USS Arizona, the Oklahoma was raised in 1943. Unfortunately, the ship was irreparably damaged, and was not returned to duty. Instead, all of the Oklahoma's weaponry and key components were stripped, and the ship was sold for scrap. The USS Oklahoma finally sank while being towed to the mainland in 1947.

The Oklahoma Memorial was designed to commemorate the lives that were lost with the sinking of the Oklahoma. For each of the 429 men that were lost, there is an individual white marble column. This gives visitors a real sense of just how many people 429 is- it's easy to talk about losing 429 people on the Oklahoma, or 1,177 on the Arizona, but the Oklahoma Memorial gives visitors a real idea of the toll that the attack on Pearl Harbor caused.
Image by Wesley Fryer on Flickr under Creative Commons License.