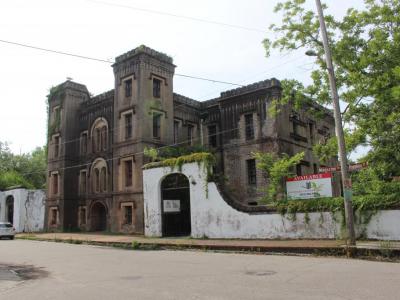 The Old County Jail was operational from 1802 until 1939 and housed Charleston's most infamous criminals, and, during the Civil War the federal prisoners of war. Over the years, The Old Charlesto Jail housed a great variety of inmates. John and Lavinia Fisher, and other members of their gang, convicted of highway robbery in the Charleston Neck region were imprisoned here in 1819 to 1820. Some of the 19th-century high-sea pirates were jailed here while they awaited hanging. During the Civil War, Confederate and Federal prisoners of war were incarcerated here. The Old Charleston Jail is one of the historically significant buildings within the Charleston Old and Historic District.

In recent years Old Charleston Jail has been a popular tourist spot after it has been featured in a number of television shows including Travel Channel, Food Network, Ghost Hunters, Ghost Adventures, and Ghost Brothers. Guided tours are available to learn its history and the ghost stories associated with the jail.
Image Courtesy of Wikimedia and Michael Rivera.