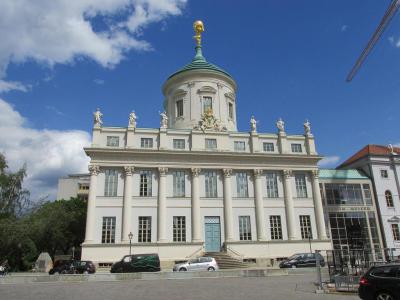 The first city hall was built in 1524 but destroyed in 1536 during a terrible fire. The second city hall was used from 1536 to 1722 when a larger hall was needed. The third hall was only used for thirty years before the city again needed a larger hall.

The current Old City Hall was built between 1753 and 1755. Architects Carl Ludwig Hildebrant and Jan Bouman designed the square under King Frederick’s direction. Old City Hall’s facade is a copy of a facade designed by Andrea Palladio for Vicenza’s Count of Angarano.

Old City Hall features a dramatic statue depicting Atlas. The architects had planned on featuring a Roman god. However, they got confused and chose the Greek Titan Atlas. The statue was originally decorated with gold-plated leaves, which fell off within two years.

Today, the Atlas statue has gold-plated copper and has survived every catastrophe over its history. Residents don’t appreciate mythology and call the statue “The Doll”. When the city hall housed the jail, it was known as “The Doll-House”.

Old City Hall was damaged during World War II bombing raids and reconstructed during the 1960s. Today, Old City Hall houses a portion of the Potsdam Museum and hosts exhibitions, conferences, and lectures.
Image Courtesy of Wikimedia and Orderinchaos.