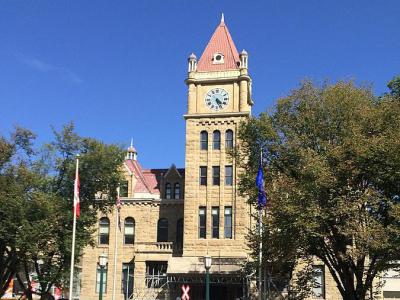 Old City Hall is an iconic building in Calgary that celebrated its 100 years recently. Robert Borden, the Conservative opposition leader opened the new sandstone city hall building in 1911 as a venue that would host sessions to discuss questions of interest to Canadians.

This building was constructed after the Old City Hall was torn down. Designed by architect William M. Dodd, it reflects the Richardsonian Romanesque style. Built at a much higher cost as compared to the estimate, this city hall saw its sandstone supply coming from Bone and Oliver quarry on 17th Avenue SW. Sandstone has indeed withstood the vagaries of the weather and the building stands firm today after 100 years. Its exterior was restored in the 1980s and the interior was redone between 1995 and1997.

Do not miss the beautiful and elegant interior of this building that is one of the few classic, original city halls still in existence in Canada. On your trip to Calgary, be sure to include the Old City Hall in your itinerary.

The Old City Hall is a significantly important heritage building in Calgary that is especially known for its architectural beauty located in the urban and economic center of Southern Alberta.
Image by Thivierr on Wikimedia under Creative Commons License.