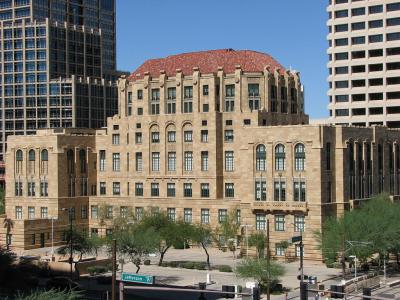 Old Phoenix City Hall and the Maricopa County Courthouse are conjoined into one building due to an interesting and unique cooperation between city and county governments. In the early 1900s, both the city and county were outgrowing the facilities that they had. The county could expand its building no more due to possible fire risk, and the city required a new, larger city hall. In 1927, when the county commissioners voted to issue bonds to construct a new courthouse, a group led by the Phoenix Chamber of Commerce convinced them to team up with the city on the project.

The project wasn't without snags, of course. There were disputes over the architect, with each organization finding their favorite. Like good politicians, though, they found a compromise. The city's choice, Lescher & Mahoney, had drawn up several schools and other public buildings for them in the past. They would be in charge of the interiors. The county's pick, Edward Neild from Shreveport, would be in charge of the exterior.

The building opened in 1929, with city and county offices in their own portions of the building. The county jail was on the fifth and sixth floors.