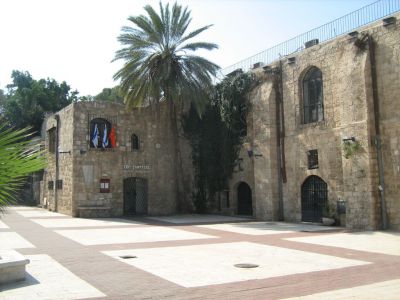 Hovering atop a hill in the Old Jaffa quarter near the sea, this museum is located within an Ottoman-era building erected on the ruins of an 11th-century Crusader fortress. Inside are displays of ancient archaeological items alongside traveling/rotating contemporary art exhibitions.

The permanent artifacts showcase the rich and varied history of the many civilizations that conquered Jaffa throughout its long history, starting with the Stone Age and moving onwards to the Canaanites, Egyptians, Persians, Philistines, Phoenicians, Greeks, Hasmoneans, Romans, Byzantines, Ottomans and the British. Each culture has left its mark on Jaffa and the museum devotes special attention to some of the artifacts and archaeological objects that they left behind.

Among the highlights are an 8th-century BC transcription of Sennacherib, King of Assyria (reigned 705-681 BCE), as well as personal items belonging to a Jewish family who lived in the area during the Roman Empire some 2,000 years ago.

Tip:
Due to hosting private events, the museum may be occasionally closed to the public.