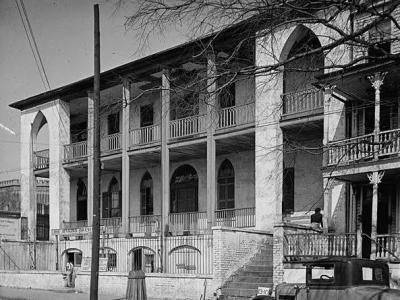 The Old Marine Hospital is located in the historic center of Charleston, on the east side of Franklin Street, just south of the Old Charleston Jail. Built 1831-33 to a design by the well known South Carolina architect Robert Mills who is also the architect of the first Washington Monument, located in Baltimore, Maryland, as well as the better known monument to the first president in the nation's capital, Washington, DC. Robert Mills is sometimes said to be the first native-born American to be professionally trained as an architect.

The Old Marine Hospital was designated a National Historic Landmark in 1973 for its association with Robert Mills, and as a high-quality example of Gothic Revival architecture. It is a two-story masonry structure, with a hip roof and a raised, arcaded basement that is a characteristic Mills element.

The hospital was built as a public facility for the treatment of sick sailors and other transient persons. The City of Charleston undertook its operation in 1834, charging arriving ships a fee to support its operation. During the Civil War, it was used for Confederate forces as well as seamen. It was badly damaged by Union bombardment.

The building has been declared a National Historic Landmark and one of the African American Historic Places in South Carolina.
Image Courtesy of Wikimedia and M.B. Paine.
Sight description based on Wikipedia.