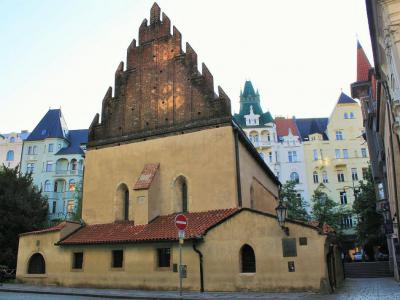 The Old New Synagogue of Prague’s Jewish Quarter is the oldest synagogue in Europe that is still used as a house of prayer. One of the city's first Gothic buildings, it dates back to 1270. It is also the oldest synagogue that boasts a twin nave, the presence of which is due to the architects being Christians, who modeled the design on the monasteries of that period.

The double naves have six vaulted bays, each with five-ribbed vaulting, which is rather unusual, as most Gothic vaultings are either four- or six-ribbed. Some scholars say that it was to avoid a semblance of the Christian cross. Each of the bays has two narrow Gothic windows. Over the tympanum of the portal, the moulding depicts 12 vines with 12 bunches of grapes. Apparently, the number 12 represents the 12 Tribes of Israel.

There are several legends attached to the synagogue; one being that its foundation stones were carried to Prague from the ruins of Solomon’s Temple in Jerusalem by angels and that the synagogue is “Tnay”, which means “on condition”. This means that the building will remain undamaged until it is moved to Jerusalem. “Thay” may eventually have been corrupted to “alt-neu” (old-new) thus explaining how the synagogue came by its strange name.

Another legend suggests that the body of the Golem of Prague lies in the genizah (attic) and that a German soldier who tried to enter it was struck down by the Golem himself. It is true that during the Second World War, the Nazi’s never penetrated the genizah. The lower three metres of the stairs, leading to the attic, have been removed and it is not open to visitors.
Image by Øyvind Holmstad on Wikimedia under Creative Commons License.
Sight description based on wikipedia