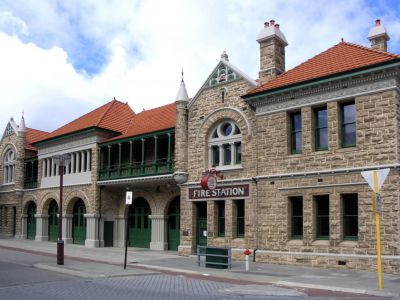 Old Perth Fire Station (Fire Brigade No. 1 Station) was the first purpose-built fire station in Western Australia. It was opened in 1901 and continued in operation until 1979.

The Fire Station was designed by Michael Cavanagh with Romanesque Revival stylistic influences and built around 1900. It is a two-storey rusticated limestone and tile roofed corner building, and has a diverse facade with arches, turrets and recessed colonnades.

In 1979, the Perth Fire Brigade vacated the building, which was subsequently restored between 1983 and 1985. The external work involved re-roofing with terracotta tiles to match existing, reconstruction of a limestone arch that had been replaced with a concrete lintel to suit larger and higher engines, and replacement of columns, mouldings and original doors which had been removed. Internal work included new timber stairs, toilets and a theatrette. New ceiling cornices and ceiling roses were installed to match the period and the existing.

The building was reopened in 1985 as the Fire Safety Education Centre and Museum. The Museum showcases all kinds of firefighting equipment that has been in use in for the past 150 plus years. The collection is complemented by active corps of firefighters. It is situated in the fire station which was established in 1901 and, in its time, was one of the most advanced in the country.
Image Courtesy of Wikimedia and SeanMack.
Sight description based on Wikipedia.