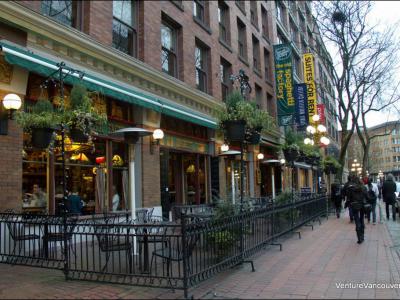 The Old Spaghetti Factory is an Italian-style chain restaurant with many locations across the United States and Canada. The very first Old Spaghetti Factory restaurant opened its doors in Gastown, Vancouver in 1970, located in what used to be the headquarters of W.H. Malkin Co. Ltd. (grocery wholesalers). Today, this is a memorable place to take one's family for a night out and for many locals it has become a family tradition.

Apart from its cuisine, this particular restaurant is noted for its wonderful decor, featuring antiques and artifacts from yesteryear, such as chandeliers, brass headboards and footboards as bench backs for booths. Its most unique antique is definitely the trolley car parked inside the restaurant and containing dining tables. Built by the British Columbia Electric Railway Company in 1904, this car Number 53 once served as a public transit trolley, running between Main and Cambie, up until 1957 when it was decommissioned. In 1969, the car was loaned to The Old Spaghetti Factory and has remained here ever since. There is also a piece of stained glass, which was originally from the Queens Carriage.

Another key “attraction” of this place are the four ghosts in residence. The first and best known of them is the spirit of a tram conductor who frequents the old trolley car. It is unclear whether the conductor’s ghost came with the trolley itself or not. Some say, he may have died in a collision on an underground rail line below the restaurant, although Vancouver’s trolley cars all ran at street level.

Another ghost is a small, mischievous spirit with a ruddy face and bright red hair, commonly known as the Little Red Man or Looky-loo; his favorite prank is to startle female customers in the ladies’ room. The third ghost is that of a young boy, who is thought to be responsible for bending cutlery on tables in the back of the restaurant. As for the fourth ghost, it's that of a little girl who appears at a table in the front window. She sits and holds a balloon. Nobody knows who she is. A friend of the restaurant’s general manager once had a brief conversation with her during which she explained that she was looking for her mother and then disappeared. Spooky!!!
Image Courtesy of Flickr and Venture Vancouver.