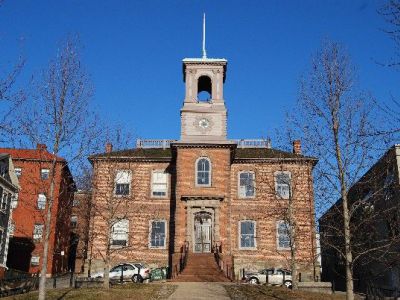 From colonial times to the mid-19th century, the Rhode Island General Assembly rotated meetings between the state's five county court houses, and five former Rhode Island state houses survive nowadays. In 1760 The General Assembly built the Old State House to replace an earlier wooden courthouse built 1730 on Meeting Street. It was largely finished by 1762 with some details being completed by 1771. Many of the Georgian architecture details were borrowed from the larger and more ornate Newport Colony House.

Before 19th century alterations to the Providence State House, the two buildings resembled one another greatly. In the 19th century the large center-front tower was added. After 1853 the state legislature ceased meeting at Kent, Washington and Bristol county courthouses, but continued to alternate its sessions between here and the Newport State House in Newport into the early 20th century.

At the Old State House on May 4, 1776, the General Assembly declared its independence renouncing its allegiance to the British crown, and the date is now celebrated as Rhode Island Independence Day. Debates about slavery occurred in the building in the late 18th century. George Washington visited the building in 1781 and 1790.
Image Courtesy of Wikimedia and Marcbela.
Sight description based on Wikipedia.