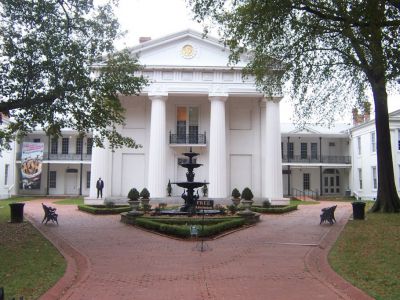 The Old State House Museum, also referred to as the Arkansas State House, is one of the oldest state capitol facilities in the United States. The building was built in 1833 and is an important piece of Arkansas history. It was here in 1861 a constitutional convention was held during which voting rights were granted to freedmen, public education was established, and Arkansas voted to secede from the Union.

The Old State House Museum was also the place where Bill Clinton gave both of his presidential acceptance speeches as well as his campaign announcement. It has been a memorial for the Arkansas War and the location for the Arkansas State Police. If you visit the Old State House Museum, you will learn about the history of Arkansas as well as have the opportunity to view important artifacts that are important to the country.

The museum offers free admission to everyone.

Why You Should Visit:

Visit the Old State House to learn about several important moments of Arkansas' history, which also contributed to the history of the United States. To set your eyes on the many fascinating artifacts from an earlier time in history.

There is a guided tour option available for visitors, which is offered every hour and last about 50 minutes. The tours are led by a professional tour guide, and no reservation is needed. However, guided tours are not necessary at the Old State House Museum. There is also a self-guided tour option in which visitors can use their cell phones to learn information.

Want to visit this sight? Check out these Self-Guided Walking Tours in Little Rock. Alternatively, you can download the mobile app "GPSmyCity: Walks in 1K+ Cities" from iTunes App Store or Google Play. The app turns your mobile device to a personal tour guide and it works offline, so no data plan is needed when traveling abroad.

Create Your Own Walk in Little Rock

Creating your own self-guided walk in Little Rock is easy and fun. Choose the city attractions that you want to see and a walk route map will be created just for you. You can even set your hotel as the start point of the walk.

Bill Clinton, one of the American presidents, lived in Little Rock. Besides the Capitol and Governor's Mansion, you can see many other places where he spent time while living in this city. These places reveal a lot about the character, hobbies and job of this outstanding person. Take this self-guided tour to explore Clinton's favorite attractions in Little Rock.

Lying in the heart of the State of Arkansas, separated from its sister city of North Little Rock by the Arkansas River, the city of Little Rock offers an abundance of cultural attractions and monumental historical landmarks, which have lured tourists for more than a century. Among these family-friendly and fun places to visit are the Arkansas State Capitol Building, the Little Rock Central High...  view more