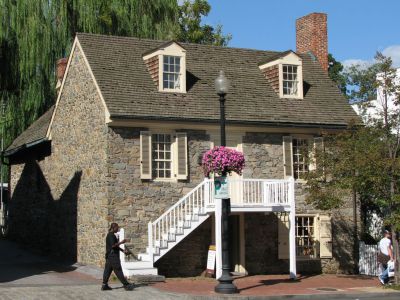 The Old Stone House in Georgetown is the oldest surviving example of Pre-Revolutionary Colonial architecture in the United States that still stands on its original foundation, and as such, represents a portal back in time to the days when the U.S. did not yet exist and the Revolutionary War was not yet fought.

Part of the fun of visiting this fine old homestead is to get yourself wrapped up in the local folklore. The place is almost an urban legend. For many years, it has been contended that this place once served as the Engineering Headquarters for General George Washington. Another piece of folklore claims that the famous Suter's Tavern – frequented by the likes of George Washington and other notable residents, famed for being associated with the land deals leading to the establishment of Washington as the "Federal City" – was located here. Sadly, neither piece of this historic folklore has ever been substantiated.

In 1953, the land and the home were purchased by the United States Government. The Old Stone House has been established as a museum and is now cared for by the National Park Service. It is open for visits every day, from 11 am to 7 pm, except for major holidays, such as New Year's Day, Independence Day, Thanksgiving, and Christmas, when it is closed. Consider this when planning your visit.
Image Courtesy of Wikimedia and Hu Totya.
Sight description based on Wikipedia.