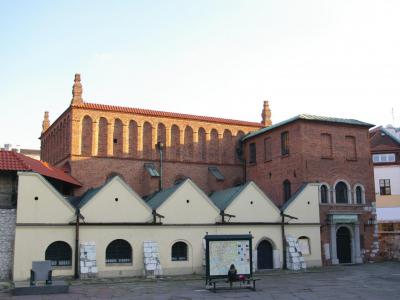 The Old Synagogue (Polish: Synagoga Stara) is an Orthodox Jewish synagogue situated in the Kazimierz district of Kraków. In Yiddish it was referred to as the Alta Shul. It is the oldest synagogue building still standing in Poland, and one of the most precious landmarks of Jewish architecture in Europe. Until the German invasion of Poland in 1939, it was one of the most important synagogues in the city as well as the main religious, social, and organizational centre of the Kraków Jewish community.

The Synagogue was built in 1407 or 1492; the date of building varies with several sources. The original building was rebuilt in 1570 under the watchful eye of an Italian architect Mateo Gucci. The rebuilding included the attic wall with loopholes, windows placed far above ground level, and thick, masonry walls with heavy buttressing to withstand siege, all features borrowed from military architecture. The Old Synagogue is a rare, surviving example of a Polish fortress synagogue.

The synagogue was completely devastated and ransacked by the Germans during World War II. Its artwork and Jewish relics, looted. During the occupation, the synagogue was used as a warehouse. In 1943, 30 Polish hostages were executed at its wall. The Old Synagogue was renovated from 1956 to 1959 and currently operates as a museum. It is a Division of the Historical Museum of Kraków, with particular focus on Kraków's Jews. The exhibits are divided into themes dealing with birth, prayer rituals, diet, divorce and death.
Image by Jakub Hałun. on Wikimedia under Creative Commons License.
Sight description based on wikipedia