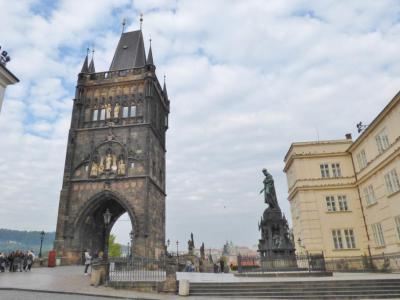 The beauty of Prague’s architecture is amply represented by the Old Town Tower Bridge which stands at one end of the Charles Bridge. Erected in the 14th century, it was part of the old fortifications built to protect the city from invaders coming from the North.

Above the arch, you can see the coat of arms of the Bohemian Kingdom and the symbol of Wenceslas IV, a kingfisher. Above these are the three statues: of Charles IV on the right; Wenceslas IV on the left; and of St Vitus in the middle. Statues of St Vojtech and St Sigismund are higher up, near the top of the tower.

The east and west façades were once also decorated, but the west side decorations were destroyed by invading Swedish troops in 1648. Marking that period is a stone plaque depicting citizens of Prague repelling the Swedes, installed shortly after. The first floor of the tower was once a debtor’s prison; today, there is a short documentary played there, showing how the bridge and the tower came into being. The top floor affords visitors a marvelous view over Prague.

You can also see two rather enigmatic inscriptions under the roof of the tower’s archway. These palindromes read: “Signate Signate mere me tangis et angis” and “Roma tibi subito motibus ibit amor”. The exact reason why these inscriptions have been put up there is lost in the mists of time, but some say it could have been a magic formula against evil.

Why You Should Visit:
One of Prague's most iconic structures; an architectural masterpiece which offers arguably the best views over the bridge.

Tip:
Come back down backward for the first two or three flights of stairs from the top, as it may prove much easier.