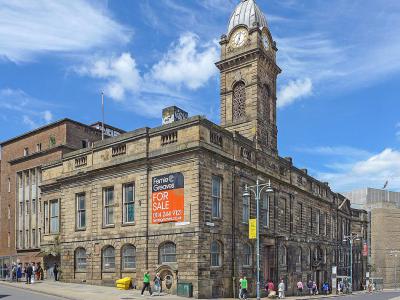 Sheffield Old Town Hall stands on Waingate in central Sheffield, England, opposite Castle Market. The building was commissioned to replace Sheffield's first town hall, which had opened in 1700 to a design by William Renny. This first structure stood by the parish church, on a site with little prospect for extension. By the 1890s, the building had again become too small, and the current Sheffield Town Hall was built further south. The Old Town Hall was again extended in 1896-7, by the renamed Flockton, Gibbs & Flockton, and became Sheffield Crown Court and Sheffield High Court. In the 1990s, these courts moved to new premises, and since at least 1997 to present, the building remains disused. In 2007, it was named by the Victorian Society as one of their top ten buildings most at-risk.
Image by Warofdreams on Wikimedia under Creative Commons License.
Sight description based on wikipedia