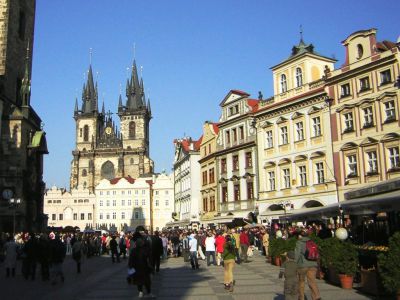 While in Prague, you are bound to visit the Old Town Square which sits right in the heart of the city. Once a thriving market, this square is now a pedestrian area abuzz with shops, hotels, restaurants, and bars; a place to meet fellow travelers, take in some of the city's most jaw-dropping sights, and enjoy nightlife.

Here you will find some of the most impressive medieval buildings in the city too, starting with the Old Town City Hall, built in 1364 and famous for its Astronomical Clock. In the northern part of the square stands the 18th-century St. Nicholas Church (a classical music venue as of lately), with its white façade that seems to gleam in the sunlight.

Overlooking the square, the 14th-century Týn Church is probably the most photographed religious site in the city, laded with Gothic spires (access inside is through the Týn School, another impressive Gothic building with many arcades). Nearby, you can visit the Stone Bell House where a prominent art gallery showcases contemporary & modern works; while next to the Stone Bell is the lovely Kinsky Palace (now part of the National Gallery Art Museum) with its Rococo façade.

On the south side you will find some wonderful Baroque and Renaissance buildings are named after their house signs: At the Golden Unicorn; At the Blue Star; At the Stone Ram; and At the Red Fox. What does the fox say? The fox says that in the past, buildings in Prague weren't numbered, but instead had to be identified by their names.

In the center of the square is the huge Jan Hus Memorial, placed here to mark the 500th anniversary of the religious reformer's death. The revered martyr of the Czechs was labeled a heretic and burned at the stake on July 6, 1415.

Tip:
Climb or take an elevator to the top of the clock tower for a 360° bird's eye view of the city.
Image by Sokoljan on Wikimedia under Creative Commons License.