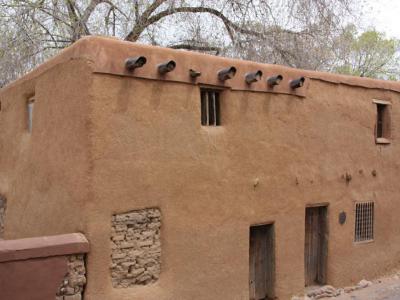 The area across the river from the central town Plaza was known as the Barrio de Analco. It was settled by the working-class inhabitants of early Santa Fe, including Tlaxcaltec people who came to New Mexico with the Spanish in the early 1600s. The center of the settlement was the San Miguel Mission.

The "Oldest" House was part of this community, but some archaeologists believe that many parts of the home were part of an Analco pueblo that was already there. The actual construction date is unknown. Some clues in the structure suggest that it may be from the late 1700s. The original house was single-story, and the second story was added in the 1920s.

Regardless of the houses' precise origin story, the museum is on the US National Register of Historic Places. It is a cornerstone property in the Barrio De Analco Historic District, which contains six other buildings from the era. Years of calling it the "Oldest House" have become engrained in local lore and evidence from the property proves that vigas in the ceilings were cut between 1740 and 1767. Currently, Wikipedia lists the De Vargas Street House as the twelfth oldest post-European building in the US (outside of Puerto Rico), with a construction date of 1646.

The eastern portion of the house is rented as a curio shop. The western side is a living example of the types of buildings that once prevailed in Santa Fe. It has Indian and Spanish influences, with crude thick adobe walls, low-hung ceilings, and dirt floors.

The Oldest House Museum is worth a stop, especially if you're in the area to see the San Miguel Mission. It gives a good idea of what it would have been like to live in Santa Fe centuries ago. Tours are self-guided and free. The space is small, just two rooms and a gift shop.

This is a quick stop best combined with other sites along the way. Don't miss the nearby San Miguel Mission.
Image by Elisabeth Anne Leonard on Wikimedia under Creative Commons License.