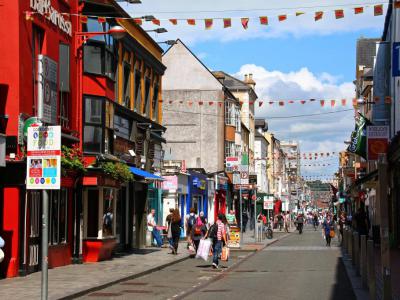 Oliver Plunkett Street (Irish: Sráid Olibhéir Pluincéid) is a key shopping street in Cork, Ireland. It was originally laid-out in the early 18th century as the city expanded eastwards beyond the original city walls. It was the only street in Ireland on a shortlist for the 'Great Street Award 2016' by London's Academy of Urbanism. The street runs in a straight line from Custom House Street to Grand Parade. Between Grand Parade and Parnell Place, the street is a shopping street. With the exception of the secondary entrance to the Penneys department store, most retailers on the street are small standalone retailers. However, there are a number of chain retailers that operate smaller stores too. This section of the street is also home to Cork's main Post Office. A small lane, known as Market Lane, provides access to the English Market.
It is also one of a number of nightlife centres in Cork - although there are more bars and restaurants on the neighbouring sidestreets than on Oliver Plunkett Street itself.
Image by Charles Curling on Wikimedia under Creative Commons License.
Sight description based on wikipedia