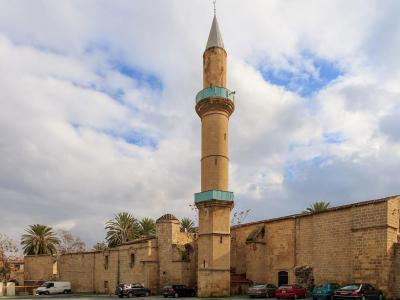 Omeriye Mosque is a unique mosque transformed from a Gothic style church in the Greek portion of Nicosia. Initially, in 1395, it was built as the Latin monastery of St. Mary of the Augustinians. In the 15th century a smaller Renaissance style building was attached, meant as a hospice for pilgrims, and was nearly destroyed during the Ottoman invasion. In 1571 the monastery was converted into a mosque and was named in honor of Omer, a Muslim prophet. Omeriye Mosque is a very important landmark in Nicosia, its 14th century main entrance being its most beautiful element.
Image by Chris06 on Wikimedia under Creative Commons License.