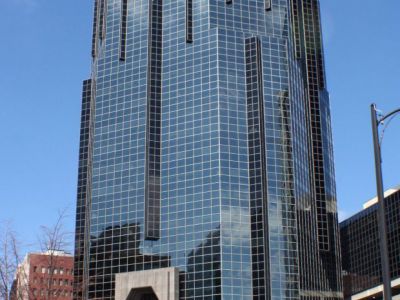 One Nashville Place, also known as US Bank Tower, is a skyscraper located on Fourth Avenue and Commerce Street. Completed in 1985, this 359-ft. octagonal building with dark glass exterior has 23 floors. It has been given the nickname R2D2 by the people of Nashville after the character in the Star Wars movies. It is currently the ninth tallest building in Nashville.

The top of the building currently features the signage of US Bank, the building's largest tenant. Through the series of acquisitions that led to US Bank's current ownership of the lease, several other now-retired banks have seen their logos at the top, including Dominion Bank (acquired by First Union), First Union (which sold its presence in Nashville to Firstar), and Firstar (which acquired, and later became, US Bank).