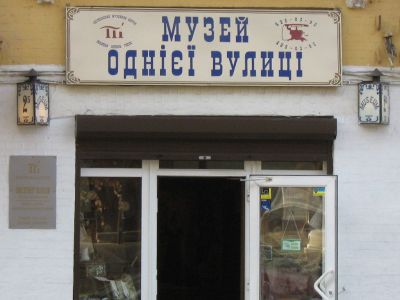 Located on the famous Andreevsky Spusk (Andriyivsky [Andrew’s] Descent), the One Street Museum is a small museum dedicated to the history of one street - Andriyivsky Descent - from its early days to the present, making it one of the kind institution in Europe. The museum was inaugurated in 1991 by a non-governmental, non-profit organisation - Artistic Society "Master" - whose main goal is to preserve the Ukrainian cultural heritage.

The museum houses over 7,000 artefacts telling the story of the landmark buildings on Andriyivsky Descent, including St. Andrew's Church, the Castle of Richard the Lion's Head and others. Some of the items on display illustrate day-to-day life of the Descent back in the 1930s, 1940s and 1960s. Other items, - postcards, newspapers, photos, umbrellas, autographs, manuscripts and historical documents, - recreate the atmosphere of the times long gone. The collection also features numerous books, signed by local authors, some of which are true rarities and unique copies. Special highlight is given to Mikhail Bulgakov, renowned Russian author and resident of Andreevsky Spusk in the early 1900s, whose literary works are widely presented at the museum.

The displayed objects seem to turn back time and recreate the atmosphere of the days in which generation of our grandparents and parents lived.