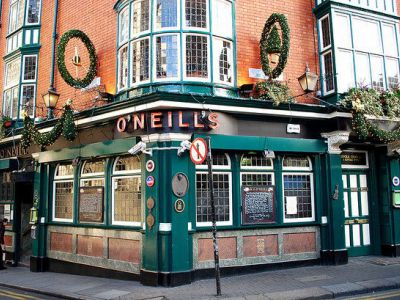 Should you ever find yourself in downtown Dublin in need of a place for a quiet pint, tasty meal or authentic Irish music performed live, or just to rest your weary feet for a while, there is one such spot called O'Neill's. A regular pub on the outside, on the inside this bar and restaurant is a real pleasure to be in, with its various nooks and crannies, upstairs and down.

They say a tavern on this site has been for nearly 300 years. From 1875 the place was owned by the Hogan Brothers, until M.J. O’Neill bought and renamed it in August 1927. Today, the building is protected and is part of a conservation area – being just a stone's throw away from Temple Bar and around the corner from Trinity College, Grafton Street and the world-famous Molly Malone Statue.

Originally, the venue was split into definite areas: a “cocktail bar” in the corner for the gentry, a public bar off Suffolk Street, and a back bar. In recent years, the next-door premises in Church Lane have been added, as a carvery, and the interior has been opened up. A small snug, immediately inside the Church Lane entrance, was a venue for the “Fabians” of the early 1960s and for later left-wing students from Trinity College. There is also an original beer garden, a smoking area and late bar for those who want to have more fun at weekends.
Image Courtesy of Flickr and wolfsavard.
Sight description based on Wikipedia.