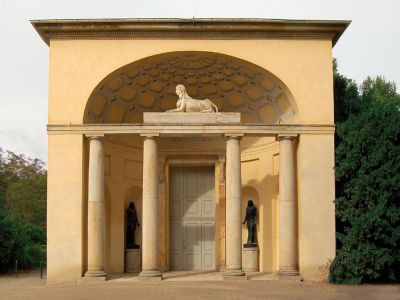 250 meters from the Marble Palace, in the southern part of Neuer Garten, stands the Orangery. This 86-meter long structure was built on order by Prussian King Friedrich Wilhelm II, between 1791 and 1793. Designed by Carl Gotthard Langhanns, the Orangery was meant for overwintering valuable exotic plants – the capacity in which it still serves today.

Apparently, the architect took inspiration from Egyptian mythology – the entrance to the building resembles an Egyptian portal. On the east side of it, above the door, lies a guarding sphinx. Additionally, two black statues of Egyptian gods, placed inside the wall niches, adorn another semicircular entrance area. All these sculptures were created by Johann Gottfried Schadow.

Two halls, to the east and the west, are for plants. The one in the middle, called the Palm Hall (for its decor of palm trees), is exquisitely furnished with yew, plum and elm wood panels. Large windows and a central door on the south side open to a marvelous view of the perennial garden situated in front of the Orangery.

Apart from sheltering exotic plants, this representative Orangery traditionally has been used for various events during the summer period (June through September); the Palm Hall, in particular, often served as a concert hall. Back in the day, during public concerts, the musically inclined king himself could be seen playing here the cello together with a chamber orchestra. Presently, the tradition of classical concerts at the Orangery is still very much alive.
Image Courtesy of Wikimedia and oxbox.