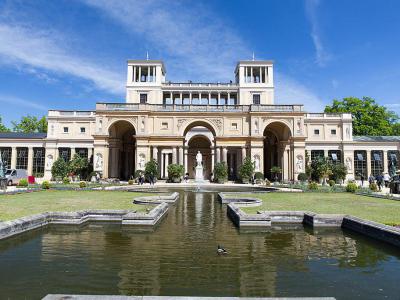 King Frederick William IV of Prussia built the Orangery Palace from 1851 to 1864. It was originally part of a larger plan with more buildings. However, only the Orangery Palace and the Triumphtor Gate were built due to political unrest and a lack of funds.

Architects Friedrich August Stüler, Friedrich Ludwig Persius, and Ludwig Ferdinand Hesse designed the palace. The palace features Italian Renaissance style and has a 300 meter long (984 foot) front. The main palace has two towers and is flanked by two side wings. The side wings house public offices.

King Frederick William IV’s wife commissioned a statue of her husband, which is now displayed in front of the peristyle.

Raffael Hall is located in the main palace and has 50 copies of Raffael’s paintings. The beautiful hall has a large skylight, and the paintings are displayed on walls covered with red silk. Raffael Hall emulates the Vatican’s Sala Regia and has been open to the public since its inception.