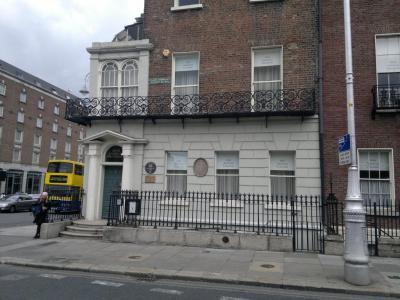 The Oscar Wilde House at N°1 Merrion Square, one of the last great Georgian squares in Dublin, is the place where Oscar Wilde’s father William, a noted surgeon, moved into in 1855, when Oscar was just one year old. The Senior Wilde had a consulting room in the house which today has been restored, featuring, among other exhibits, several antique surgical instruments lent by the Royal College of Surgeons. He had his own operating theatre in the basement, which is now a café.

William Wilde died in 1876, leaving his widow heavily in debt. She had to sell the house and move to England. The property continued to be a family residence for many years until it was turned into small flats and one-room studios. In 1971, the building was in such a bad shape that it was boarded up and remained so for over 20 years.

In 1994, the American College of Dublin took on the building and completely renovated it, bringing a new shine to the ancient wood floors, restoring the magnificent cornices, hanging antique mirrors in the halls, the dining room and the drawing room.

Today, students have classes on the top two floors of the house; the other rooms being used for art and sculpture exhibitions, lectures given by local and visiting artists, conferences and private functions. Each room has been decorated as it would have been in Wilde’s time, with exquisite antique furniture and fine rugs. The museum is open for guided tours only, booked in advance.
Image Courtesy of Flickr and Mark Healey.