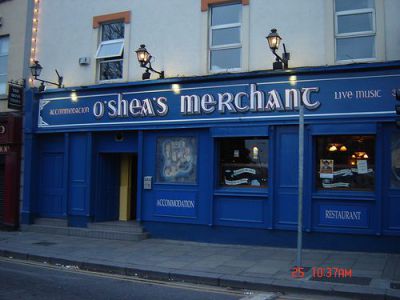 Located directly across the road from the Ireland’s oldest pub – The Brazen Head, O'Shea's Merchant may look a bit shabby, like a salty dog sailor bar, but in reality it is anything but that. Traditional décor, encrusted with pictures and memorabilia from the past, O’Shea’s Merchant’s has the feel of the good old times – a place where Irish culture lives and flourishes.

Otherwise known as the Kerryman’s pub, this watering hole dates back to 1985, established by one Ned O’Shea – a legend from Kerry, aka 'The Merchant'. Ned retired in 2010 and since then, John and Maura O’Shea have been running the family business, keeping the tradition of rousing music, Kerry food and the warmest of Irish welcome alive for all who pass through the door of O’Shea’s.

Surrounded by whiskey distilleries and breweries, including the world famous Guinness brewery, the place offers a range of Irish whiskey along with a pint of ‘plain’, i.e. Guinness. Visitors can learn the art of pulling a perfect pint here and get a certificate to prove their expertise.