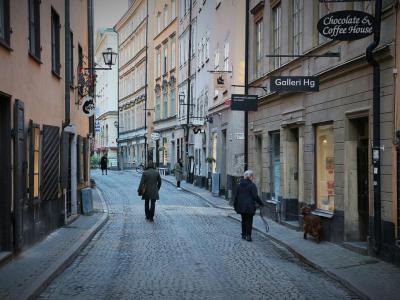 For many centuries Österlånggatan has been one of the key thoroughfares in Stockholm. Back in the 1300s, the street used to reach outside the city walls and was filled with woodwork and blacksmith workshops supporting the local shipping industry. The shore line was eventually pushed eastward by land fillings of gravel and rubbish, so by the 14th century the street had become the 'long street east of the wall' (i.e. Österlånggatan), far from the water, paved and lined with shops and homes.

The shipping trade gradually disappeared and by the early 20th century virtually everything associated with it on Österlånggatan was gone. In sharp contrast to its old days as the backyard of the dock district, crowded with sailors, taverns, travellers, and traders, in the 1980s, the street had gradually transformed into a relatively quiet area, notwithstanding the many restaurants and shops attracting tourists. Historic buildings like the Royal Coin Cabinet, the Stockholm Concert Hall and the Stockholm School of Economics are all located along Österlånggatan. The famous statue of Saint George and the Dragon is also found here, at Köpmanbrinken (the Merchant’s Slope).

Many a tavern, popular with the business crowd, lined the street in the 17th century. Among them Riga at Number 19, Holländska Dyn ("Dutch Slough") at Number 21, Förgylda Draken ("Gilded Dragon") at Number 27, Tre Kungar ("Three Kings") at Number 28, Sveriges Wapen ("Swedish Arms") at Number 29, and Stjärnan ("The Star") in the Rococo building at Number 45. Of all these taverns, only Den Gyldene Freden ("The Golden Peace") at Number 51 has survived. Established in 1722, it is mentioned in the Guinness Book of Records as one of the oldest eateries with unaltered interior, which can hardly give a hint of the filth, stench, rows, and misery once hidden behind its romantic name.

The street was particularly loved by German immigrant merchants and was considered a middle class area up until the 1800s. It is crossed by several alleys, each of which has a unique name, usually associated with the buildings therein. Archaeological excavations in the late 1970s revealed the original beaten track, some three meters below today's pavement, along with the bricked walls that once surrounded the city in the Middle Ages. A good place to explore the historic part of the Swedish capital!
Image by Øyvind Holmstad on Wikimedia under Creative Commons License.
Sight description based on wikipedia