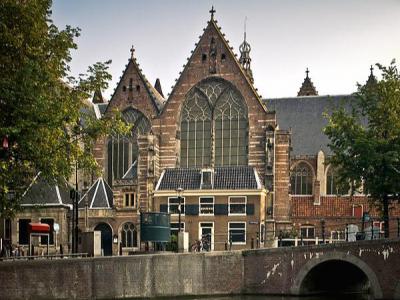 The Oude Kerk (“Old Church”) is the oldest parish in Amsterdam and is surprisingly located amid the area of vice – the vastly popular Red Light District of De Wallen. Old itself, the church is also home to the city’s oldest bells, dating back as far as 1450. The Oude Kerk is a Roman Catholic temple and its patron is St Nicholas.

Built in the early 14th century, it was originally a modest wooden cemetery chapel, attesting to which fact are a number of gravestones found on the floor. Beneath laid to rest are more than 10,000 Amsterdam denizens, some of whom are quite famous personalities, including Jacob van Heemskerck – a naval hero, Frans Banning Cocq – the central character of Rembrandt’s famous “Night Watch” painting, as well as the Dutch composer Jan Sweelinck. Eventually, the Oude Kerk took up the Gothic appearance visible today.

Matching the exterior is the equally elegant and surprisingly spacious interior, featuring three naves with a ceiling made of wood and covered in magnificent paintings depicting saints and Biblical scenes – a sort of “time portal” capable of transporting visitors centuries back.

Why You Should Visit:
Unlike the Niewe Kerk which is bigger and more ornate, the Oude Kerk is very old and has a great sense of history to it.

Tip:
Wonderful views from the tower (note the fee payable with credit/debit cards only); coffee and snacks in a charming garden.