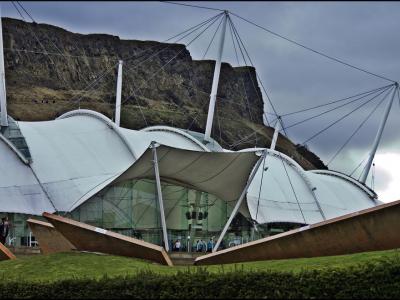 Our Dynamic Earth is a great place for an instructive, interesting day out for both adults and children. It is located at the foot of Arthur’s Seat, not far from the Scottish Parliament building.

O.D.E. is an earth science museum, which opened in 1999, funded by the Millennium Commission. It is housed in the William Younger Conference Centre, a modern building consisting of a thin steel skin stretched over a steel skeleton, and looking a little bit like a circus big top.

The museum is an educational adventure voyage through time and space, with smells, sound effects, visual displays and interactive workshops. The journey starts in the present, where you see the world as we know it.

Then you step into the “time machine” and you are whisked into space at the time of the Big Bang. You’ll follow the creation of the planets, the forming of Earth and the movement of the tectonic plaques and the glaciers. You’ll learn about the power of volcanoes and earthquakes.

From the beginning of the Earth, you’ll be taken to the evolution of species where there is a section that explains why some species became extinct, why the dinosaurs died and why the mammals survived.

Coming back to the present, you will discover the savannahs and mountains, deserts and tropic rain forests and take a quick trip to the North and South Poles. The visit ends in the Future Dome which shows how the future will be and what you can do in the present to preserve it.

While in Edinburgh, discover the popular avenues, boulevards and streets that lead to its most famous squares. While exploring these streets, you can find a copious amount of historic and religious edifices, fashion boutiques, classy restaurants, famous market areas, and other sites. Check out the most popular Edinburgh squares and streets in the following self-guided tour.