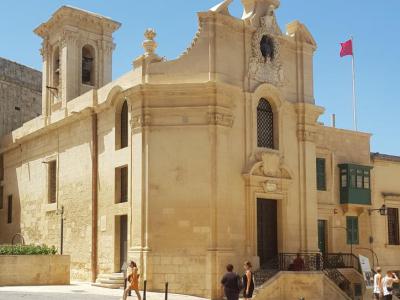 Our Lady of Victories Church, Valletta

This church was the first building built in Valletta. Its purpose was to commemorate the victory of the Knights of the Order of St. John over the Ottomans during the 1565 Siege of Malta.

In 1566, a ceremony was held to lay the foundation stone of the city of Valletta, and the church was the first building built in the new city to express the Malteses' gratitude.

The church was dedicated to the Nativity of the Virgin. Later, the Order of Saint John dedicated it to Saint Anthony the Abbot. It was damaged in various conflicts over the years, the latest being bombings during World War II.

The remains of Grandmaster Jean Parisot de Vallette, who ordered the construction of the church, were originally interred in the church's crypt. While they were later moved to St. John's Co-Cathedral, a statute of Jean de Vallette sits across the street in the plaza bearing his name.

A complete restoration of the church was begun in 2000 as part of a city-wide rehabilitation project. The exterior was completed in 2002, but interior restoration work is on-going.

Like most Maltese churches, this one is lavishly appointed with priceless works of art and treasures. Paintings above the altar depict Saint Anthony of Egypt and Saint Anthony of Padua. They were brought to Malta in 1530.
Image Courtesy of Wikimedia and Matthew Axiak.