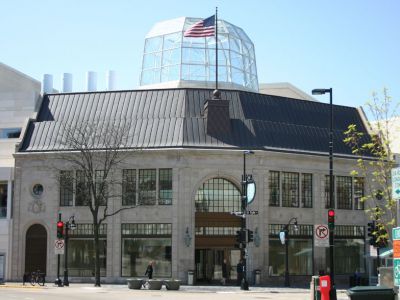 Overture Center for the Arts is a performing arts center and art gallery in Madison. The center opened on September 19, 2004, replacing the former Civic Center. In addition to several theaters The center was commissioned by Jerome Frautschi, designed by Cesar Pelli, and built by J.H. Findorff and Son. Frautschi paid $205 million to construct the building, making it the largest private gift to the arts of its kind It was intended to replace the Madison Civic Center, located on the same block on State Street. The building has seven venues, in addition to art galleries: Overture Hall, Capitol Theater, Playhouse, Promenade Hall, Rotunda Stage, Wisconsin Studio and Rotunda Studio, and Visual Art Galleries.

The Overture Center has been the subject of several controversies. After Frautschi's initial gift, some citizens complained that the City of Madison's priorities were skewed. Others said the project would hurt the image of nearby State Street. Still others believed it would be accessible only to the wealthy while limiting access to local and smaller acts and artists.
Image by Chief-O on Wikimedia under Creative Commons License.
Sight description based on wikipedia