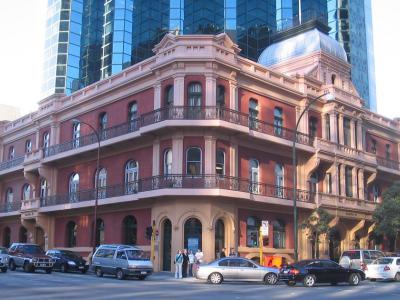 The Palace Hotel is a landmark three-storey heritage listed building located in the city's central business district. Originally built in 1897 as a hotel during the gold rush period of Western Australia's history, it was converted to banking chambers and offices in the 1980s and now accommodates the Perth headquarters of Woods Bagot, Adapptor and Hatchd. The building is located on the most prominent intersection in the financial district of the city, at the corner of St Georges Terrace and William Street.

When the hotel opened for business on 18 March 1897 it was, although slightly smaller than some of its contemporary buildings in other capital cities in Australasia, described as "... one of the most beautiful and elegant hotels in Australasia".

The building is described as being of a "Federation Free Classical" architectural style. It is three storeys high and of brick and iron construction. It was designed by architects Porter and Thomas and built by prominent mining entrepreneur and real-estate investor John De Baun at a cost of £64,000.

The building was entered into the register of the National Trust of Australia in June 1973 and elevated to a permanent entry in 1980 "as a first-class example of the quality of building at the time of the gold rush".

In the period leading up to and during the 1980s redevelopment, lobbying from The Palace Guards, the National Trust of Western Australia and the public at large pushed for the retention of some elements of the original building.

Due to its ornate and grand style, its prominent position within the city, and being the only building of its type and scale in St Georges Terrace, the hotel has been an important landmark in Perth for all of its life. In its early years, the hotel afforded commercial travellers a high level of opulence and comfort while visiting the city and offered a tangible reminder of the wealth and prosperity of the state during the gold-boom period.

Prior to the construction of the Perth Town Hall in 1870, the site (which then housed the Freemasons' Hotel) was the pre-eminent social and political focus of the town—important decisions such as the establishment of a local police force in 1851 were made there. At the time of its transformation into banking chambers in the 1980s, considerable amounts of nostalgia and acclamation of its place in Perth were reflected in the local media.
Image Courtesy of Wikimedia and Moondyne.
Sight description based on Wikipedia.