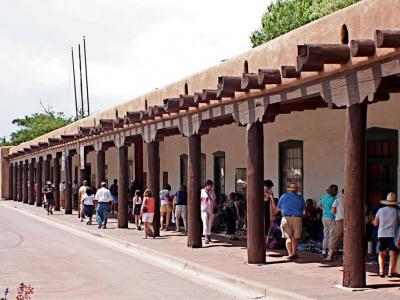 Palace of the Governors, Santa Fe (must see)

The Palace originally served as the seat of government of the Spanish colony of Nuevo Mexico, which at one time comprised the present-day states of Texas, Arizona, Utah, Colorado, Nevada, California, and New Mexico. After the Mexican War of Independence, the Mexican province of Santa Fe de Nuevo México was administered from the Palace of the Governors. When New Mexico was annexed as a U.S. territory, the Palace became New Mexico's first territorial capitol.

It was declared a National Historic Landmark in 1960.

Operating hours: Tuesday – Sunday: 10 am – 5 pm except in the summer (Memorial Day through Labor Day), when the Palace is open all week long. Fridays: til 8 pm