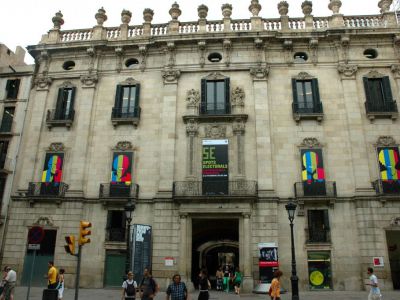 Palace of the Viceroy’s Wife, Barcelona

Palace of the Viceroy’s Wife (or Palau de la Virreina) was a private residence of Manuel Amat, Viceroy of Peru. Amat was Viceroy of Peru from 1761 to 1771. He took full advantage of his powerful position to accummulate a huge amount of wealth. In 1772, he hired the architect, Josep Ausich, and the sculptor, Carles Grau, to built a palace on La Rambla to show off his wealth. The construction lasted from 1772 to 1775. Unfortunately for Amat, he did not live long to enjoy his palace. In the years after Amat's death, Barcelonans saw a widow living in a luxurious palace and started calling it “Palace of the Viceroy’s Wife”.

The palace is an impressive building and one of the best baroque style building in Barcelona. Its highly-decorated façade and the interior courtyard and staircases give a glimpse of wealth and power. Today the building is the headquarter of Barcelona's City Council Culture Institute which hold frequent art exhibitions. The building is well worth a visit because its beauty is best appreciated from inside.
Image by Didier Descouens on Wikimedia under Creative Commons License.