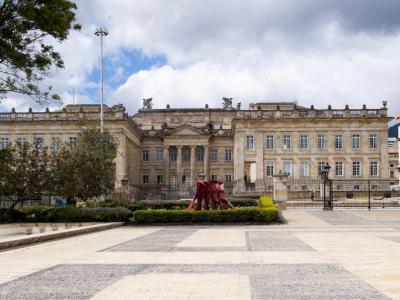 Casa de Nariño (Spanish for House of Nariño) or Palacio de Nariño (Spanish for Palace of Nariño) is the official home and principal workplace of the President of Colombia. It houses the main office of the executive branch and is located in the capital city of Bogotá. In 1908, it was dedicated after being constructed on the site of the house where Antonio Nariño was born. The design was made by architects Gaston Lelarge, a French-born former pupil of Charles Garnier, and Julián Lombana. In 1980, the structure was rededicated after the construction of additions. The palace also houses works of art and furnishings from different years. Its garden houses the Observatorio Astronómico de Bogotá, designed by the Capuchin friar-architect Fray Domingo de Petrés and built in 1802-03.
Image Courtesy of Flickr and SC National Guard.
Sight description based on Wikipedia.