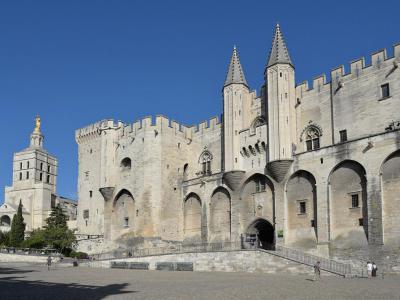 Palais des Papes (Palace of the Popes), Avignon (must see)

The Palace of the Popes has got to be one of the largest, if not the largest, medieval Gothic structures in Europe. It served well as a fortress, palace, and papal residence throughout the 14th century, during the Catholic schism and the "Babylonian Captivity" of the Papacy. Six papal conclaves and seven Popes were maintained in the palace.

The palace is actually two buildings joined together. There is the old palace of Benedict II, firmly ensconced on the rock of the Doms, and the new palace of Clement VI. Clement was known to be the biggest spendthrift of the Popes of Avignon. The palace is probably the best example of International Gothic style.

The designs were made by Pierre Person and Jean de Louvres, two of France's best architects of the time. The ornamentation is beyond lavish and produced by two students from the Siena School, Simone Martini and Matteo Giovanetti. The papal library housed in the palace held over 2,000 volumes. It was a big draw for scholars and humanists.

The palace was huge enough to affect the organization of the church of the time. Services were centralized and the size of the administrative staff exploded. The number of people employed including lay people exceeded 1500 by 1316. In spite of this, the Avignon papacy and administration became irrelevant when operations returned to Rome.

Today the palace is a historical and architectural landmark. It has over 650,000 visitors a year, making it one of the top ten such attractions in France. It houses a convention center and a research center and serves as a library for the archives of the department of Vaucluse.

The place has over 160,000 square feet of floor space. It has twelve strong crenelated towers and walls and arches designed to withstand heavy siege bombardment. The study of Clement VI has celebrated frescoes showing deer hunting scenes. It is popularly known as the "Deer Room." Clement was not known for hunting.

The Palace regularly hosts art exhibitions. The works of Matisse, Braque, Picasso, and Mondrian have been shown there and also single exhibitions of Miguel Barcelo and Stefan Szczesny.